This morning young T came out wearing quite the t-shirt. Yesterday when we were tidying up his chest of drawers I’d come across it, and snaffled it to the back again, without even showing him.

He was quite surprised to find out that it’d been mine. I got it when the damming of the Franklin and Gordon rivers was an election issue and winner for Bob Hawke when Malcolm Fraser had been PM for several years. The saving of this river system was an election promise, and the ALP kept it. Not only were these t-shirts all around the place, there was also a collection of stunning photographs, made in to posters so everyone would know what would be lost.

The Greens gave their preferences to the ALP and the Hawke and Keating years began.

There was a little blonde 14 year old girl with her Daddy helping hand out the how-to-votes at the hall in the Spot in Randwick, wearing this shirt. We were all so thrilled when the local Labor candidate, Jeanette Machugh, won that seat for the first time! Philip became a bellwether seat, til it was abolished in the mid Nineties.

I kept it because I couldn’t part with it. I never really thought it’d be worn again, let alone by a child of mine. 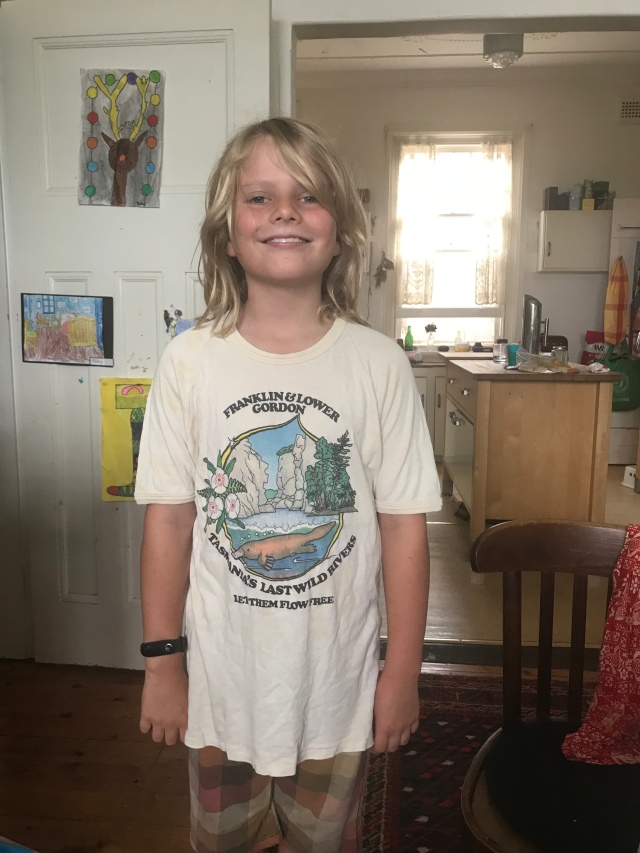 You can tell I’d have been a bit taller than my lad, being fourteen and and all! He’ll get a few years wear out of it, if the shorts he’s wearing are anything to go by. They’d been bought in Singapore when he was one and G was three, but that’s another story!